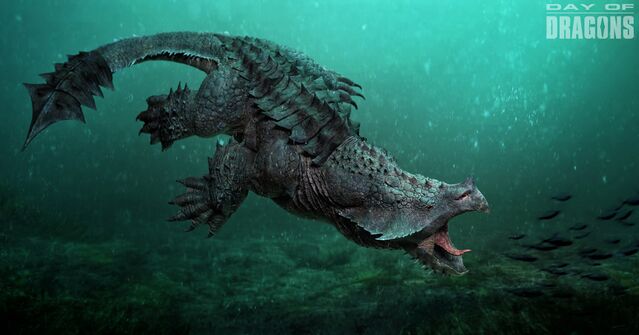 The Swamp Snapper is a large semi-aquatic creature which has what looks to be armoured areas on its body. It is found in bodies of water and is a threat to hatchlings which makes it commonly hunted by adult dragons for food.

A deadly predator to small or immature dragons, the Swamp Snapper prefers moist, cool habitats. They will float at the surface of the water with only their nostrils exposed. Once a Snapper detects movement, they will launch their deadly attack. Grabbing a drinking dragon with their powerful beak, the Snapper will then attempt to drag its prey back into the depths.

Though fearsome, Swamp Snappers are not the most intelligent creatures and may underestimated the size of their target, latching onto more than they can handle. This makes them easy targets for skilled adult dragons looking to lure out this aquatic creature.