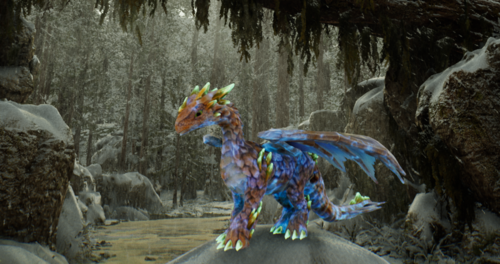 The Plasma Dragon is a small dragon whose element is plasma. It is one of the three dragons available in Alpha and the start of Early Access, and the first dragon to have its ability revealed and added to the game.

The Plasma Dragon's ability is invisibility. When crouched for an extended period of time, the Plasma Dragon will become cloaked, taking on a transparent appearance. It is possible to see invisible Plasma Dragons as they move or stand still, however it can be very difficult without the Flame Stalker's Thermal Sense.

Considered to be a "glass cannon," the Plasma Dragon can inflict a lot of damage to non-plasma creatures with its plasma blast, but cannot take many hits. Despite its low health, it is the fastest dragon in the game.

There are no known skins or designs for the official look of the Plasma Dragon, however in the current state of the game there are skins implemented, with some examples visible below: