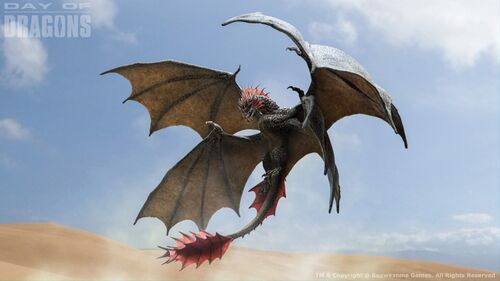 The Hybrid Dragon is a Wyvern/Dragon Hybrid, it has 2 rear legs, 2 winged arms, and 2 more wings on its shoulders. Being a hybrid, it is unable to nest, but it does have an Alpha stage of growth and is one of the larger species of dragons. Being a hybrid, it's parentage is unknown, so its element is also a mystery until the hybrid is old enough to produce bile. It is the only dragon who's element is randomized at birth and it will be an effective and unique choice in combat.

The Hybrid Dragon is a mix between a wyvern and a dragon, only accessible by Kickstarter Backers. It will have two hind legs, two winged arms, and two more wings on its shoulders. As a hybrid, this dragon is infertile and cannot nest. The Hybrid is the only dragon to have a random element.

The Hybrid Dragon currently has no known special abilities.

These are all currently known skins for the Hybrid Dragon, not counting the black, gray and white skins; and the oreo skin obtainable via nesting.