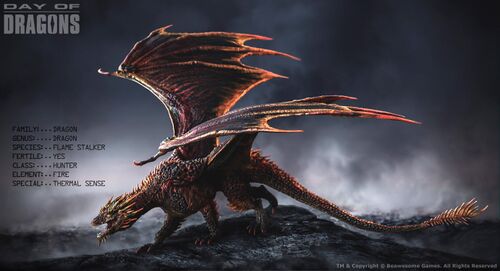 The Flame Stalker, or simply Fire Dragon, is a medium-sized dragon whose element is fire. It is one of the three dragons available in Beta and early Early Access, and the first dragon to be designed specifically for Day of Dragons.

Flame Stalker's ability is a thermal sense, allowing it to see other dragons, even invisible Plasma Dragons.

Capable of using fire breath, the Flame Stalker can ignite other dragons from a medium distance. The Flame Stalker is also able to use its breath during flight. However, when facing other fire-based creatures, such as the Inferno Ravager, it must rely on its bite to inflict damage.

The Flame Stalker's special ability is used to detect other dragons within a nearby radius. It is a counter to the Plasma Dragon's cloak ability.

These are the four currently known skins for the Flame Stalker, not counting the black, gray and white skins; and the oreo skin obtainable via nesting